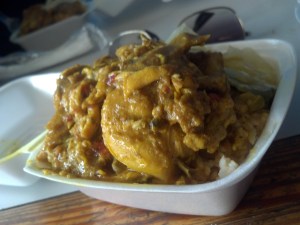 I went with a couple friends to Twiggy’s Panamanian Caribbean American Cuisine on Brookland Park Blvd. I accidentally found this place while driving around lost in the North Side. I had to get lost to find it again, but we found it.

After we ordered and paid through the plexiglass, we sat down inside. The only dish available at the time was the $5 chicken curry lunch special. We ate chicken curry. It included chicken, rice and beans and cabbage. The chicken was good – maybe not unforgettable, but it was good. I like this place. We were the only customers at the time. Twiggy came out to meet us and she brought complimentary glasses of a Jamaican hibiscus and ginger tea that she called “Sorrel”. She was apologetic that the other menu items (jerk chicken, brown stew and some others) weren’t available yet because the kitchen was “running behind”. We didn’t mind the limited menu, but I appreciated the gesture. Twiggy won me as a repeat customer. She’s a Jamaican grandmother who has owned the restaurant for more than a year. She’s cool.

I gave the chicken curry lunch at Twiggy’s 74 out of 79 points.

After lunch we walked across the street to Michaela’s Bakery for these individual-sized “French Apple Pies”. (Why do they call it French Apple Pie? I don’t think the French like raisins any more than we do.) The pies were good. I’ll also go back for the huge cinnamon rolls they had in the case.